ANANT SUDARSHAN
Lighting Up Bihar: Improving Electricity Supply and Reducing Distribution Losses
(with Robin Burgess, Michael Greenstone and Nicholas Ryan)
​
The power sector is widely viewed as one of the biggest constraints on India’s economic growth. Almost half of power drawn from the grid is not paid for and is unmetered, unbilled or pilfered. In the state of Bihar, 45% of power consumed fell in this category in 2014. In this project we partnered with the Government of Bihar in trying to address this problem. The ultimate benefit implementing reforms to improve the Bihar State Electricity Board’s finances is to improve the quality and availability of power.

A second intervention tested to see if a system of stretch targets and bonuses for utility staff can achieve higher rates of revenue recovery. A third experiment evaluated the impact of sending different types of SMS messages to consumers to encourage payments. A fourth involved a one-time payment of money towards consumer arrears, to examine whether bills are not paid because consumers are in a debt-trap of sorts. 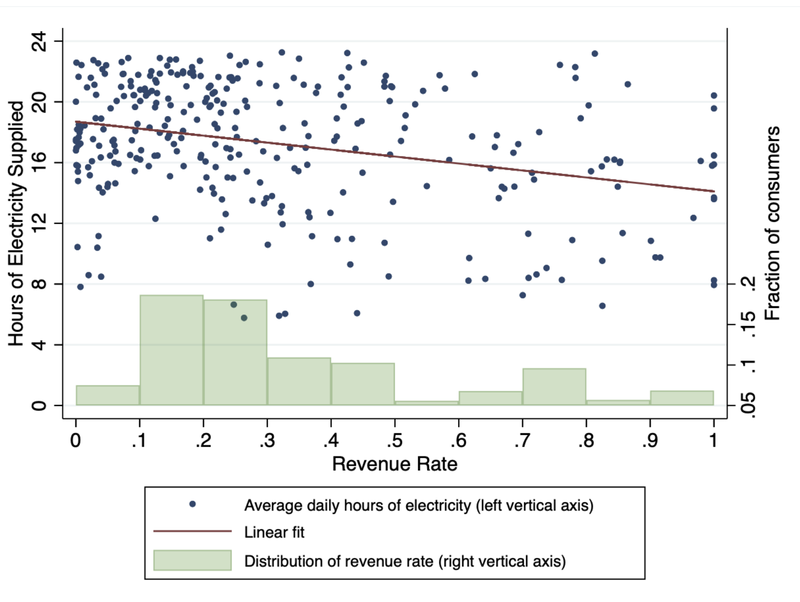 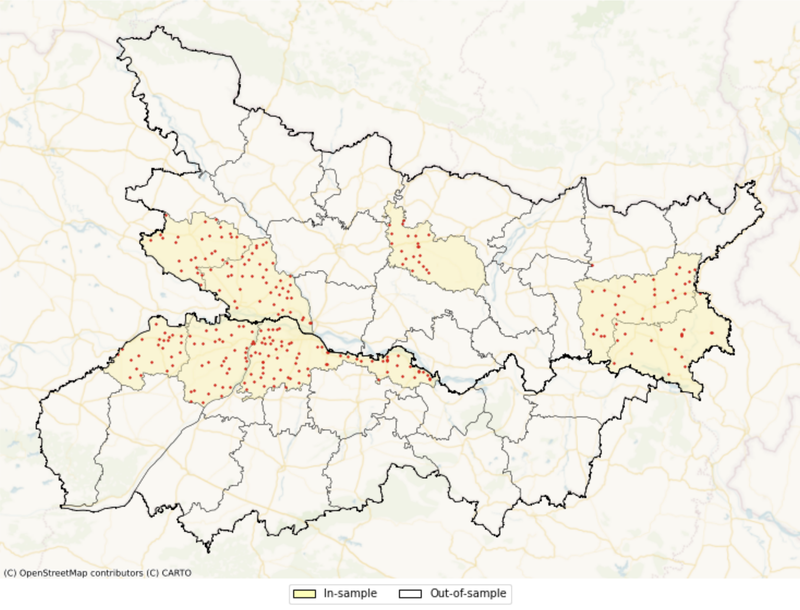 Paper in Journal of Economic Perspectives: The Consequences of Treating Electricity as a Right

​Related Op-eds and other writing:
Powering Growth in Bihar. Economic Times. October 2019
​
​Electrifying India May Require Convincing People Power is Something Worth Paying For. Forbes. Dec 2019 (with Michael Greenstone)

​Recent Press Coverage: Compilation
Smart Metering and Utility Payments
​​(with Robin Burgess, Michael Greenstone, and Nicholas Ryan)
​
This project evaluates the ability of smart metering with prepayment to break the cycle of low payment leading to restricted and low-quality supply. It aims to answer whether smart metering can improve cost recovery, and thereby energy reliability and access. We are conducting a large-scale neighbourhood-level randomised control trial in Haryana, India, where a smart meter rollout is already being implemented. Over 60,000 smart meters have been installed in the towns of Karnal and Gurgaon.

This project will answer three key questions:
​The study will measure outcomes related to revenue collection; energy injection and consumption; new connections; usage of power and service quality; energy access; and theft. Helping to provide evidence on the effectiveness of technological innovations, the knowledge generated will be of immediate policy relevance to utilities in all developing countries that experience problems with high losses and theft.​
Electricity Theft and Strategic Enforcement
(with Fiona Burlig).
​
Research suggests that one reason for pervasive power rationing on the intensive margin (outages) and extensive margin (connections) is that the largely state-run utilities in the developing world fail to recover payments from many consumers (Burgess et al 2020). A widespread social norm that electricity is a “right” can turn into a vicious cycle where (i) consumers do not feel the need to pay for power, (ii) so utilities are forced to ration to prevent bankruptcy, and (iii) the resulting low quality supply further reduces willingness to pay.

To break this cycle requires figuring out ways to increase the willingness of consumers to pay their bills. In this project we are testing an innovative set of interventions to increase bill payments in partnership with the state-run electricity utilities of the largest state in India, Madhya Pradesh. Specifically, we will evaluate the effectiveness of different combinations of common enforcement actions - (i) targeted warning letters and/or disconnections, (ii) peer comparisons, (iii) late fees, and (iv) debt write-offs. In recent years the effectiveness of some of these instruments has been carefully studied in the context of reducing tax evasion, a setting that is analogous in many ways to the problem we have described.

In addition to evaluating the effectiveness of a suite of interventions accounting for both spillovers and heterogeneity, we also intend to carry out primary data collection through a phone survey on a subset of very poor households. Our survey will be designed to measure the effect of increased electricity bill payments on other household economic outcomes. This question is of first order importance because the political view that people have a right to power even if they do not pay in full is partially informed by the possibility that the costs of imposing a higher energy burden on consumers is very high. These may be further exacerbated by credit constraints. To produce sustainable policy recommendations, we will also measure the net impact on poor consumers and investigate their reasons for non-payment.
Decentralized Solar and Electricity Access in Bihar
(with Robin Burgess, Michael Greenstone, Nicholas Ryan)

The global electrification frontier is the collection of places in the world where, at a given time, households are getting electricity for the first time. The steady movement of this frontier, in the United States from 1935 onwards, Brazil from the 1960s, China in the 1980s, and much of South Asia and sub Saharan Africa in the 2000s up through today, has been inseparable from structural change and economic growth. In pursuit of growth, many developing countries are investing large sums to build out their distribution infrastructure and subsidize connections, to reach the roughly one billion people who are still not on the electricity grid (International Energy Agency, 2017).​

The advent of off-grid solar has spurred hope of a faster, greener path to universal electrification.  The convergence of “big push” grid expansions and off-grid solar means that many households in developing countries now have a choice between competing electricity sources. This paper estimates the demand for electricity, over all available sources of electricity, in order to understand how poor households are making this choice. We seek to measure the value of electrification and to attribute this value to the changes in technology and policy that are taking place on the frontier. The setting is Bihar, India, and the project involved an experiment that introduced a new product, solar microgrids, and varied its price across 100 village-level markets for two and a half years. 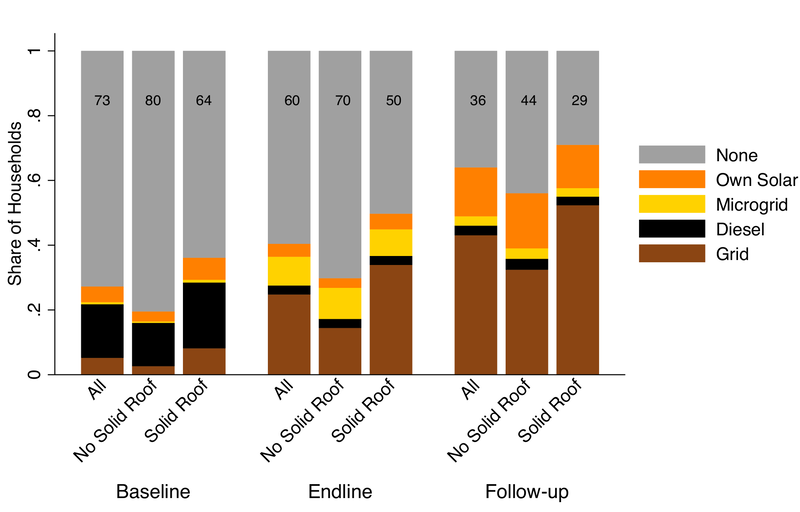 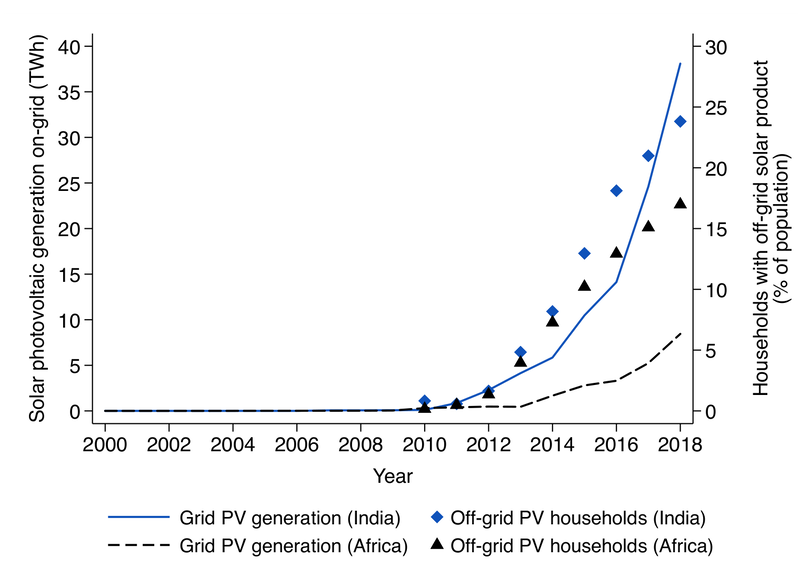 EPIC Working Paper Series: Demand for Electricity on the Global Electrification Frontier
Nudges in the marketplace: The response of household electricity consumption to information and monetary incentives
​​
This paper provides field evidence from India examining changes in electricity consumption in response to various behavioral interventions. I study the impact of (i) weekly reports with peer comparisons of electricity use; (ii) reports augmented with monetary incentives to reduce consumption and (iii) price variation. I estimate consumption changes using a randomized control trial in conjunction with a quasi experiment. Households provided reports alone reduced summer season consumption by 7 percent. Price elasticity identified from cross-sectional and time series variation was estimated at −0.56. Against this benchmark, the impact of peer comparisons alone was equivalent to increasing tariffs by about 12.5 percent. Counter-intuitively, when weekly reports were augmented with monetary incentives rewarding electricity conservation, households no longer reduced consumption. Households receiving reports also show higher price elasticity relative to controls. These results provide new evidence identifying the response of developing country consumers to behavioral interventions while examining the interaction of prices, incentives and information. 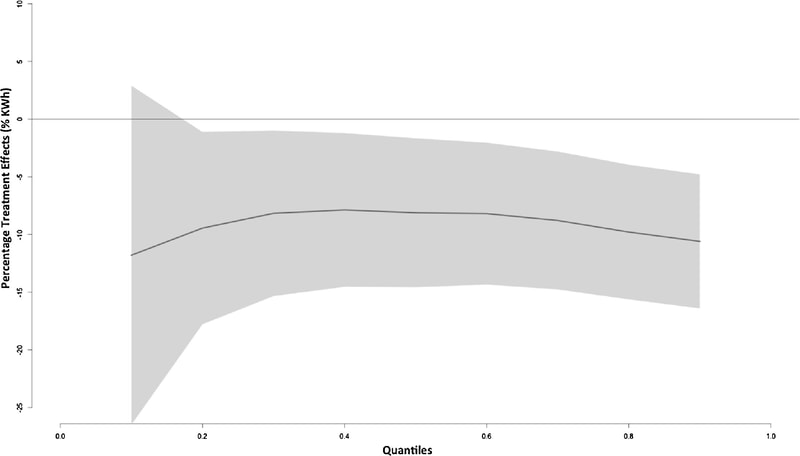 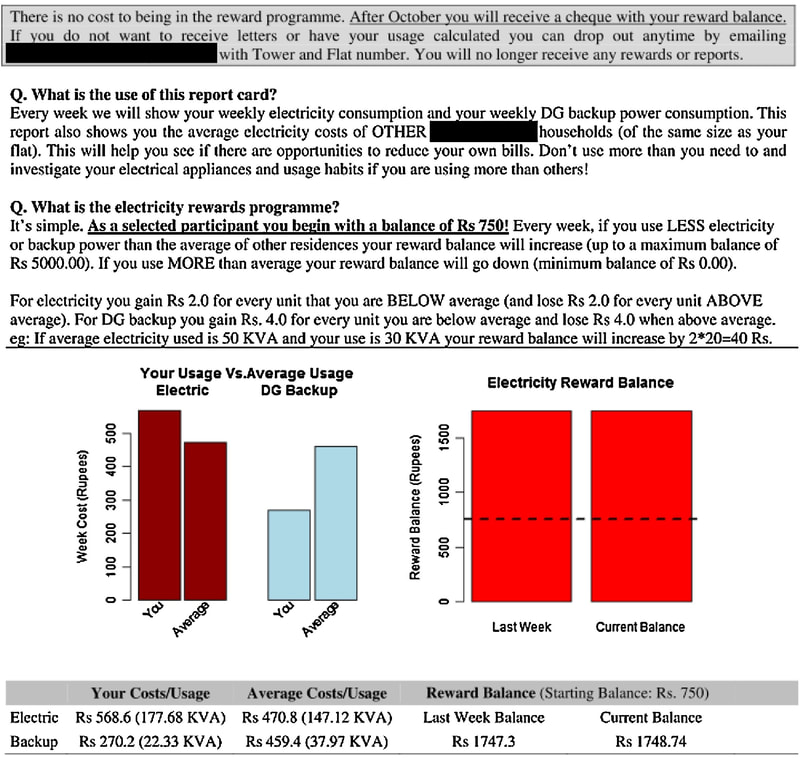 Published Paper in Journal of Economic Behavior and Organization: Nudges in the Marketplace
Subsidy Reform and Farmer Welfare in Rajasthan
Nicholas Ryan (Yale University) and Anant Sudarshan (University of Chicago)
​
Agricultural electricity subsidies in India have been meant as a lifeline to farmers, allowing the spread of irrigation using electric pumps to extract groundwater. Instead, they have locked rural India into a destructive cycle of groundwater depletion and bad power supply. Farmers, given electricity nearly for free, use too much, draining groundwater, worsening poverty, and bankrupting electricity distributors. In turn, distribution companies resort to rationing supply.

Economic theory suggests that, given the distortion caused by pricing power below cost, a Pareto improvement is possible. Both farmers and the distribution companies could be made better off if subsidies were given as a lump-sum transfer, instead of being tied to power use, which promotes over-consumption. In collaboration with the Governments of Haryana, Rajasthan, and Punjab we are designing and testing variants of this type of subsidy reform. 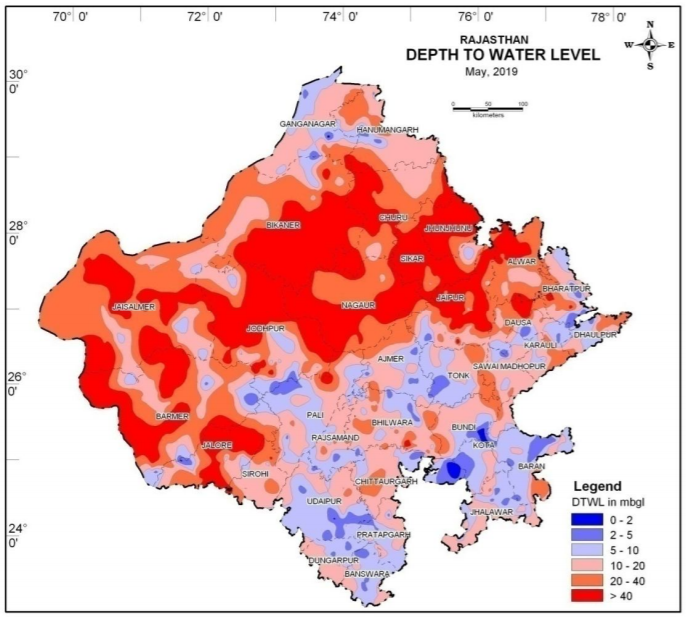 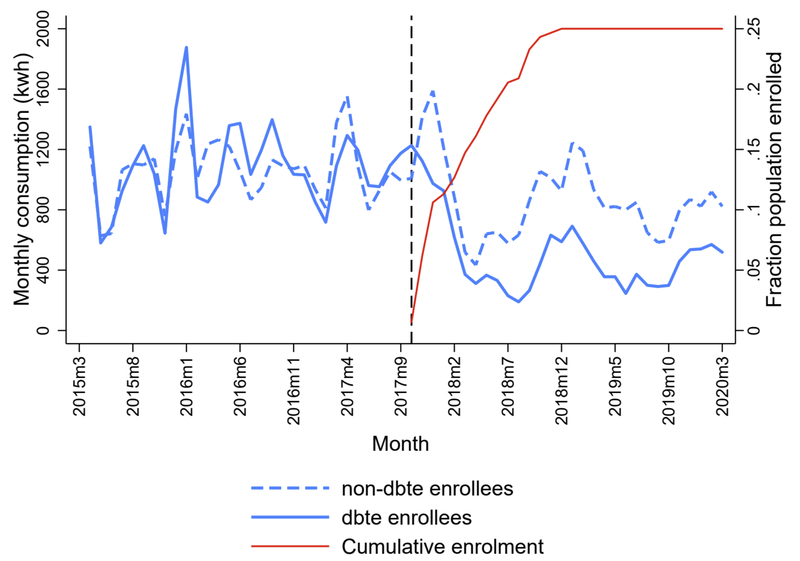 Real-time Feedback and Electricity Consumption: A Field Experiment Assessing the Potential for Savings and Persistence
(with Sebastien Houde, Annika Todd, June Flora and Carrie Armel)
​
Real-time information feedback delivered via technology has been reported to produce up to 20 percent declines in residential energy consumption. There are however large differences in estimates of the effect of real-time feedback technologies on energy use. In this study, we conduct a field experiment to obtain an estimate of the impact of a real-time feedback technology (Google Powermeter). Access to feedback leads to an average reduction in household electricity consumption of 5.7 percent. Significant declines persist for up to four weeks. In examining time of day reduction effects, we find that the largest reductions were observed initially at all times of the day but as time passes, morning and evening intervals show larger reductions. We find no convincing evidence that household characteristics explain heterogeneity in our treatment effects; we examine demographics, housing characteristics and psychological variables. 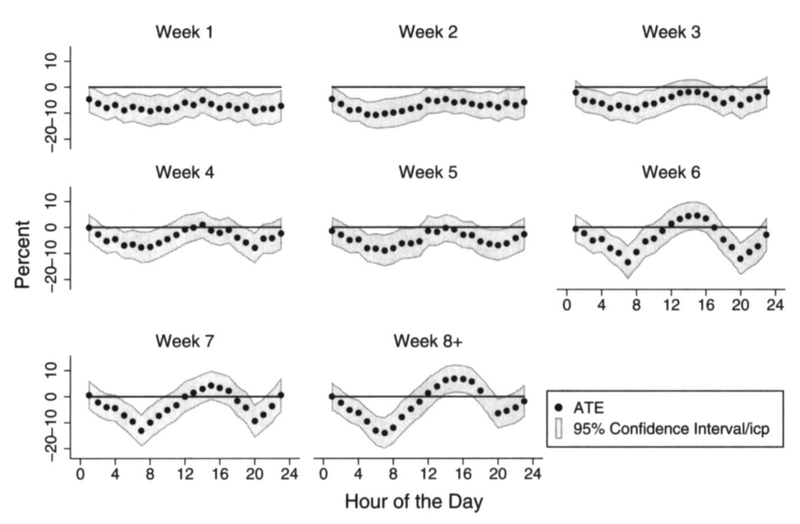 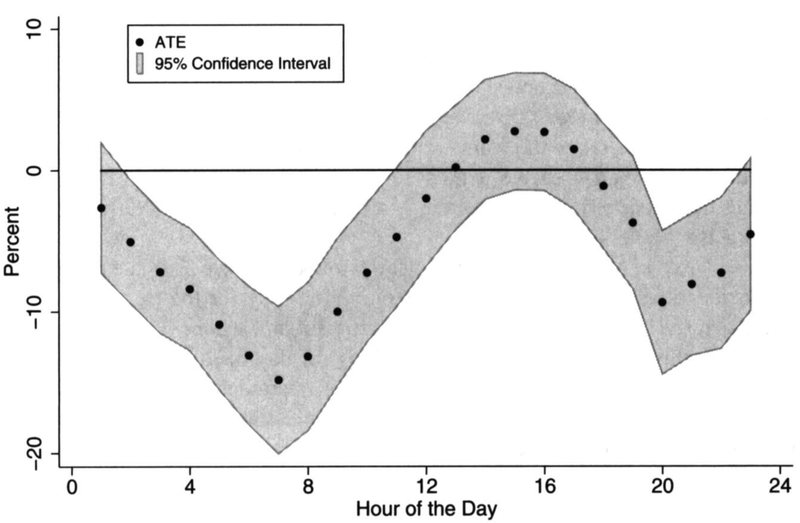 Published Article in The Energy Journal: Real-time Feedback and Electricity Consumption
Deconstructing the Rosenfeld Curve: Making Sense of California's Low Electricity Intensity
​
Regulatory regimes that have increased household energy efficiency are of widespread interest to policymakers today. A prominent example is the state of California where electricity intensities in the residential sector have stayed near constant since the 1970s in sharp contrast to nationwide trends in the United States. A structural model of residential energy consumption is used to show that the use of energy intensities alone to evaluate the success of California efficiency programs is misleading and glosses over important policy independent factors. We quantify important effects of price, climate conditions and demographic characteristics on energy consumption in California. We also provide evidence of split incentive considerations in residential energy consumption patterns. We conclude that while state policy may have had some effect on efficiency, caution needs to be exercised in using the California example to inform expectations from similar measures in other regions.
Peer Reviewed Article, Energy Economics, 2013